Much research has been conducted to in the last many decades to improve the energy rating of particular miscellaneous electronic devices, and various state of the art smart materials have been adopted. Discussion on these recent developments will be completed, which would require assessment and evaluation of both and quantitative qualitative research. Quantitative as well as quantitative data will be presented with focused research on various applications, policies and trends.

The increasing energy security concerns around the globe have raised many questions, and the need to switch to more energy efficient systems has now been the primary adopted method by various continental policy makers. The main research questions to be discussed in this dissertation include:

There is not denying the fact that electronic and electrical engineers have played a key role in realizing this technology. Furthermore, a lot of effort has been made to learn methods of applying this technology. Researchers throughout the world have shown great intent towards acquiring this new skill set. However, it should be noted that the learners should have some mechanical background to be able to correctly understand the mechanism behind these applications as most of the time these applications use of a mechanical system.

It has been observed that learning power electronics and electrical power management is more attractive and exciting in an environment where the properties of the final element of an application are explored in addition to examining the methods of control power electronic technology. In order build a world class academic profile in the fields of power electronics and electrical energy conversion, a significant number of Universities in UK have been developed which are involved in the optimization of energy efficiency / conversion. However, according to the Department of Innovation and Skill strategy group of UK, the industrial demand is higher than the number of enrolled students in these Universities.

Various trade associations in the UK have established industry specific communities to assess and analyze the establishment of state of the art communities. The European Centre for Power Electronics at the European level has been established to provide a central support and focus on technology road-mapping (Power Electronics, 2011)  Over the last many decades, the improvement in the energy efficiency and its impacts on environment and economic growth has provided numerous benefits to the people of this planet. Investors and administrators therefore should realize their responsibility and duties towards encouraging steady and continuous progress in the world of sustainable energy and fuel flexibility (Ross and Alan, 2005). There is also a need to encourage energy efficient programs and technologies to be able to improve our standard of living, the efficiency of our transportation systems, factories, offices and to control the factors that contribute towards the efficiency of our homes and industries.

The effective electric load in each house hold can be defined as the combination of various electronic devices, products of equipment (Mohan, Uderland and Robbins, 2003). Other definitions of effective of miscellaneous electric loads are the large end uses that occur in a small fraction or the small end uses occurring in a large fraction in our houses. Electric equipment such as micro wave ovens, toasters, kettles, coffee makers, televisions, computers, mobile phones, laptops and tablets, well pumps, aquariums, fridges, freezers, heaters and electric motors are the typical electronic or electrical equipments that result in miscellaneous electric loads. Considering the diverse range of products and processes that contribute towards these energy losses, it is extremely tough to find system based solution (Ross & Meier 2000). Furthermore, the behavior and each occupant in operating and choosing theses devices makes the job of controlling total energy use of MELs much more complicated (Hendron 2005).

There is no denying the fact that it is very hard to control the factors affecting the use of energy and associated with reducing MELs but that must not stop us from looking into the energy based products to look for ways to improve energy consumption, and the overall performance of the electrical equipment in our houses (Wenzel et al. 1997). Considerable research has been performed already in an effort to identify the type and magnitude of most common MELs (Zogg & Alberino 1998). NREL has led this area of research to be able to find other similar but more energy efficient methodologies and technologies (Little, 1999)

Lawrence Berkeley National Laboratory continued the work under this key area of study to identify home office equipment and other general consumer electronics to achieve greater energy savings (Rosen & Meier 1999a). Research has also been conducted to classify conventional plug loads and end use loads for small electronic products (Rosen & Meier 1999bIn the research conducted at the University of Newcastle Upon Tyne by Mecrow and Jach A.G. in 2008, it was found that the through applying variable speed electric devices and integrating the driving load, the electrical drive efficiency can be improved. Through adaptation of proven concept, it possible it is possible to save up to 15 – 30 % energy of system which are driven by electrical machines. In the, UK, almost half of the total energy generated by the rotational electric generators is consumed on the electrical drive motors (Keulenaer et al., 2004) Therefore it can be concluded that even slight improvements in the energy efficient of electrical machines can have a huge impact on the overall economy not only in Europe, but all over the world. .

However, it should be noted that regardless of occupants living patterns and decision making, there is a need to develop a comprehensive system based approach that involves both architect engineers and the construction company to achieve long term and short term energy saving goals.

According to the International Energy Efficiency (IEA), 2007, the worldwide electricity demands is on the rise, which are due the rise in the electrical appliances demands. The following figure-1 illustrates this quantitatively;

The efficiency of basic household electrical equipment has improved in the past, which has been partly due to the polices of governments; however the ownership of items such as air conditioners, lighting, and other similar equipment have increased.

To cope with such changing trends around the globe, state of the art technologies have been developed, which hopefully would stabilize the increasing trend of electrical consumptions. Some of the influencing technologies which are now being applied and being further developed are the new LED lights, Hybrid automotive technology, and the multi stage evaporative cooling systems for household and commercial buildings.

Just a few years ago, the light bulbs, which were normally rated as 60-150W, were consumed/used at almost every household. Within a decade, through research / development and the policy implementations, the energy savers with rating of less than 25W were brought into the market. Today, the domestic consumption is being switched to even more efficient LED lights.  Similarly it has been stated by various analysts that in the next few decades, the Hybrid Car Technology which is considered to be more energy efficient, is expected to replace the current transport vehicle types in the automotive industry.

The alternative technologies can have a huge impact on the total electrical requirements. The Business as usual (BaU) projected that through switching to best available technologies (BAT), which also presents the least life cycle costs (LLCC), it would be possible to save more than 30% of the total expected consumptions. This is illustrated in the following figure-2;

Therefore, it can be stated that stimulating the sustainable market(s) to develop state of the state of the art energy efficient system can prove to extremely important in the near future. Through government level implementation of new policies, it can be expected that the next few decades will show improvements in the design through maturing the electrical-mechanical designs of machines run on variable speed derived. The potential efficient movements drives combined with the efficiency gains through increase of drive efficiency can save up to 24 billion kWh per year in the United Kingdom (Mecrow and Jack, 2008).

The world leaders in the manufacturing industry have already realized this as their key performance parameter. Case studies on specific equipment development with respect to the subject parameter can prove to be as useful methods to understand how the products development strategies have evolved and, from the engineering point of view, how these equipments have been designed to be energy efficient. 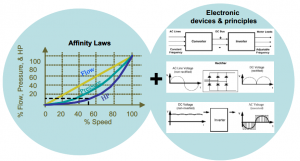 One such case study has been completed by Kulatunga and Bastick in 2009, in which energy saving potential of motors was assessed using the variable speed motors with the damp control, speed drive and vane control systems. From the results obtained, the researcher concluded that various aspects of engineering models and equipments can be improved with respect to energy savings through the application of optimized control system and materials. The writer further recommended that there is a need to explore such opportunities and so that various applications can be re-engineered with respect to efficient energy utilization.

The conducted multi method research approach along with the presentation of the primary as well secondary data collection will be included in this section. Application of inductive type approach will be presented to structure the layout of the methodology used; for various electronic devices, especially in the domestic use. Approach recommended by various previous research articles will also be discussed in this section.

Energy Efficiency of all the products and systems must be considered not only in the aspects of product development, but also because of its global influence and environmental impact. The development of stare of the art power electronic device can increase the energy efficiency and improve cost effectiveness. It can also help balance the energy demands and production. Due to the recent energy security concerns, technologist and engineers are being motivated to help in saving energy and develop / explore new smarter methods of efficient technology

Rosen, K. and Alan, M., (1999b). Energy Use of Televisions and Videocassette Recorders in the U.S. LBNL-42393. Berkeley, Calif.: Lawrence Berkeley National Laboratory.