An Environmental Impact Assessment (EIA) is required for this project as the environmental consequences whether positive or negative have to be predicted to decide whether or not to proceed with the project. It is absolutely vital to make sure that the impacts of the projects are at an acceptable level in terms of the changes/disorder caused to the environment. Since a new steel oil pipeline has to be installed, there is a need to select the exact route for it and therefore the EIA is required to be performed to identify the extent of impacts of this network in areas where environmental risks are significant (CBP, 2012).

The oil pipeline operations and construction promotes serious environmental and social effects. Undertaking respective measure is the best cost effective method for dealing with the effects in the first steps (planning phase) of the project of oil pipeline. Carrying out the assessment of the environmental impact (EIA procedure) is one of the undertaking measures. When the undertaken measure is legal and in conformity with the public participation that is implied by the good practice, it comes out to be in the interest of all concerned parties (CBP, 2012). The key idea is to investigate the environmental impacts during planning and design phases of the project, thus finding different ways to mitigate these impacts in order to prevent the environment. This practice will also provide decision makers with reasonable forecasts and predictions to make their final decision (BSI, 2014).

Another objective of this study is to choose or prepare a design/route that causes minimum disturbance to the areas rich in populations and infrastructure to protect the environment during the construction process. The selected pipeline route should not, at any cost, go through the areas rich in population and should stay as far away from these sensitive places as possible. The public participation PP is a required element of any executed and regulated EIA procedure.

The key objective of this paper is to identify Environmental impacts in relation to the construction of oil pipeline. Following are the environmental constraints that need to be dealt with as part of the pipeline route selection procedure:

According to the project specifications, the pipeline route should also incorporate site for a pressure testing station. The purpose of having a pressure testing station is to ensure safety and maintenance of the pipeline, minimizing the risk of damage to the property and public. The testing Drawing number 6 shows that possible location of the pressure testing station in an area far from natural habitats, heritage, birds sites, scientific interest sites and natural reserves. Overall, the key aim of the pipeline route selection process is to keep the capital and maintenance costs on the lower side as well as cause minimum disturbance to the general public and governmental projects during the construction phase (Pipeline Route Selection, 2014). The proposed pipeline route itself also avoids habitat, natural and national reserves, woodlands, gardens, parks, sites of special interest, monuments, special sites of conservations, and scientific sites.

“The selected route should be recorded on alignment sheets of an appropriate scale. The coordinates of all significant points, such as target points, crossings points, bend starting and end points, should be indicated. Contour lines should be recorded at intervals sufficient for design purposes, particularly with regard to the installation and operational phases, and consideration should be given to the need for a vertical profile of the route”, as stated by Guy Henley (2012).

The new pipeline shall be 600mm in size and the working area shall not be more than 50 meters in width. The method used for the purpose of installing the pipeline will be according to the industry best practices. The new oil pipeline will be made of steel due to the advantages such as strength, reliability and recycling.

Following are the potential environmental impacts that can occur as a direct result of the construction of oil pipeline within the suggested corridor:

To be able to reduce the potential negative impacts of the new oil pipeline along the proposed corridor, the following mitigation strategies during the construction and operational phase of the pipeline could be employed (Pipeline route selection process, 2012). The aim of these mitigation is to avoid certain types of environmental impacts occurring or, where impacts are unavoidable, reduce their potential significance to acceptable levels.

The EIA Mapping series attached to the paper section shows that there are environmental factors to be dealt with along the suggested exact route of the pipeline. However, since the chosen corridor does not pass through densely populated areas, there is no need to look for alternative pipeline route. As briefly discussed before, the shortest possible route is selected whilst avoiding any risks of environmental impacts. However, even after the installation of the pipeline, maintenance works will be required on a regular basis to prevent oil leaks, dangerous liquid pressure inside the bending pipeline, contamination of soil and safety risks to humans or animals. Environmental impacts have been reviewed in detail to minimize the hazards, accidents and long terms effects particularly where the route runs through heritage sites, bird sites, natural reserves and area of special interest. Furthermore, the approved construction practices will be following during the construction phase. As indicated before, the route corridor involves a large important bird sites area and therefore permission from the UKs department of Bird Life must be obtained to commence the construction activities. If the permission is not granted, a different route corridor will have to be employed.

The approach to complete this project will incorporate compliance to the laws, operational excellence and industry best business practices. The surrounding communicates in which operations will be performed will be supported and engaged. This pipeline plan has been developed as per the Pipelines Act 2005 (Preparation of Pipeline consultation plans, Guidelines).

Trenching: Final technique will be decided after consultation with the contractor. Excavator and rotary trenching machine are the typical techniques employed.

Horizontal Directional Drilling: Will be performed if the trenching method is not suitable to the conditions

Documents detailing the lowering in, backfill, easement rehabilitation and hydro testing will be prepared and made public, Pipelines Act 2005 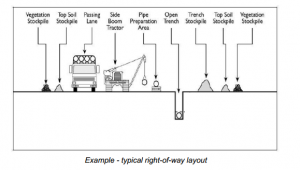 From the maps prepared with the help of Microsoft word and Street Maps software, it was made possible to review the environmental constrains along the selected route of the pipeline. The pipeline route corridor involves areas of special scientific interest, woodlands, national parks, gardens, monuments, and birds, which can be considered as an adverse case. The suggested route takes into account the associated environmental impacts after reviewing the impacts in detail. Recommended mitigation strategies have been proposed to minimize the impact on important bird sites, sites of special interest, monuments, parks and gardens and national natural reserves. The series of maps attached to this report can be referred to for detailed information on how the environmental impacts are identified (BSI, 2014). Public consultation plan will is provided for the regulatory authorities to ensure smooth project completion. Accurate information on the project will be provided to the land owners and occupiers in acceptable format. Furthermore, construction procedures will also be shared and employed only after they are approved by the all the concerned parties. 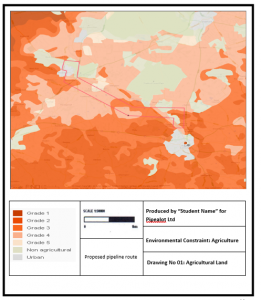 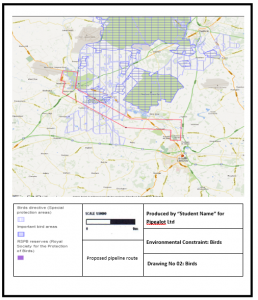 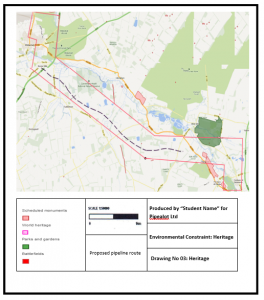 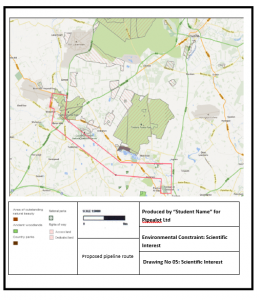 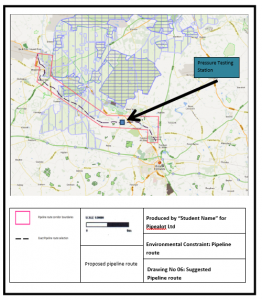