An Experimental Study on the Effect of Wind on Compartment Fire

The concept of decision support system (DSS) has been derived from computer based information systems/models. The DSS is designed to provide support/solutions to decision problems. The computer based information systems such as; office automation, activity processing and information management provides the bases of the management support system which is termed as DSS. Information system play a pivotal role in terms of supporting the managers in structured or unstructured decision making activities, as many decisions at organizational scale can have influential consequences during the life span of the subject organization. Therefore, much research was conducted in the late 1970s to develop information system models to support decision making activities, with primary focus on structuring the critical decision processes (Bonczek, et al., 1981). Diversified DSS can support decision makers at all level in a range of fields such as operations, strategic decision making, financial management, optimization and simulation (Hess at al., 2000)

It should be noted that the decision support system is not intended to replace the decision makers, as these are designed to only support the management teams. These programs focus on enhancing the effectiveness of the decision making process, as it utilizes a systematic approach towards decision making through provision of information technology (Bhatt and Zaveri, 2002)

Synopsis; The aim of this paper is to provide a clear prospective on how to make informed decisions concerning complex systems. The decision support system holds great significance in the modern age, and this development has been the result of extensive research conducted in the 1950’s and 1960’s, which aimed at improving the decision making process at the Carneigge Institute of Technology (Keen and Scott-Morton, 1978).

Multi approach data collection research methodology has been adopted for this paper. The data collection process has been completed though utilization of various data resources/bases, such as online data centers, journals, books, and the university library data base.

Along with the latest journals/papers, research conducted in the later half the 20th century was also reviewed. This research strategy was adopted to develop an understanding of the background, and the need-based development of the decision support systems. Furthermore, additional sources such as lecture notes, survey papers and encyclopedias of library and information science were also reviewed.   Due to the limited scope of this work, only qualitative theories and methodologies have been included in this paper.

Initially, Google search engine was used to obtain basic information of the topic, which lead to evaluation of results and development of ideas on the key words. This information was then used to gain relevant information from authentic sources produced by recognized organizations; such as ScienceDirect, Springer Link, MyAtehens and Library search engines. In order to obtain the quality references (published papers); the following key words were used;

The published papers were carefully reviewed in accordance with their relevance to the topic, publishing date, publisher, the quality of information, presentation, and whether or not the papers was published through a recognized and reputable organization. Based on these analyses, 4 to 6 papers were selected, and the literature of theses papers was than analyzed to develop an understanding of the topic.

This multi approach search strategy lead to obtainment of a comprehensive set of reference resources, covering more than 50 years of quality research throughout the world. The method was proven to be well suited for completion of this research paper.

Data support systems enhance capability to manage with complex problems.  Many operational as well as management activities in any organization can be time consuming, and the use of efficient tools can enhance the speed, productivity and effectiveness, precision and decision making abilities for human resources at all levels. (Eom, 1996). Management of an organization can make good decisions if the task at hand is easy, however, decision making support systems  is essential when it comes to a huge amount of information and/or when dealing with complex systems. Example of such situations can be presented as;

As indicated previously, much research has been completed in the last many decades to comprehend interactive data support systems which aid the users in the management and decision making. The computer based information systems are designed to assist on decision problems (Bhatt and Zaveri, 2002; Lee and Huh, 2006), however, of DSS can be traced-back to preceding work of Simon et al Gerrity et al in 1960s; who presented decision support systems through an organizational perspective (Keen and Scott, 1978). These models consisted of the three primary parameters; which are design, choice and intelligence, which later extended to incorporate an additional phases of monitoring.

There was a constant growth in terms of data support systems after the invention of computers. Many organizations started utilizing the transaction processing system (TPS) or electronic data processing (EDP) systems to automate routine clerical tasks such as payroll, inventory and billing in the late 1950s. The emergence of management information system (MIS) in 1960s and its development to extract valuable management information by aggregating and summarizing massive amounts of transaction data and allowing user- interactive managerial queries (Simon,2000). 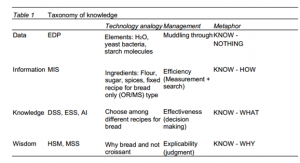 In 1970 the study of DSS has become essential part of (CBIS) Computer based information system. During mid 1980s, executive information system emerged (EIS) as an important tool to serve the information needs of executives. The latest addition of CBIS is artificial neutral networks (ANN). ANN attempts to achieve knowledge processing based on the parallel processing method of human brains (Eom, 1996).

DSSs can be broken into three basic components:

DBMS acts as an information bank for the Decision Support Systems. It is capable of informing the user of availability of data and to gain access to that data. It stores large quantity of data which is relevant to the class of problem (Holtzman, 1989).

The users of DSS are mainly managers it is considered as the main product of an interaction. The main objective achieved by a Dialog generation and management system is to improve the capacity of the system user to benefit and utilize from the Decision Support System (Druzdzel, 1997).

The survey states that computer-based DSS are widely applied in profit marketing as well as non-profit organizations. It is widely applied in corporate functional management (Aronson, 1998). It is applicable in accounting for the auditing of health insurance claims, estimating pencil manufacturing cost and stochastic cost-volume profit analysis (Eom, 1996). It can be applied in information systems for data communication for example evaluating LAN topologies and designing a fiber optic WAN. It is also using for systems analysis, design, development and evaluation.  It is widely used in marketing for allocating retail space in retail outlets, competitive pricing and market share. It can be used for selecting marketing sites. It is used in resource management for example purchasing and material management of large projects especially selecting suppliers (Glymour, 2000).

The future of decision support systems

As this is ultra modern era new tools and technologies are emerging hence, adding new capabilities to DSS/ESS and will reshape the developments in organizations. The data warehouse, data mining and intellectual agents are some notable developments that will significantly affect the future development of DSS. Problems and decision models are being formulated using knowledge based models. It can be also used to analyze and interpret the results. The concept of decision support system has emerged as one of the latest tool in management information systems as we are moving into the global era where temporal and global boundaries are disappearing sharply. Over the next decade, DSS would focus on teams, work groups and disturbed organizational structures (King 1993). Global management support system (MMS) would emerge as a key element in decision making and it will act as an essential weapon against global competitors (Eom, 1996).

DSS can be defined as knowledge-based systems that support decision makers by formulating information or data that can amended to mechanical analysis. Decision support systems are gaining popularity manly because they assist in problem solving, modeling and structuring. Upper level management of an organization facing a situation where it is required to make tough tactical and strategic decisions can benefit greatly from DSS as these systems to avoid failures and improve success levels (Marek, 2002). DSSs are a tool specially designed to integrate scientific techniques to help managers make complex decisions (Simon, 2000).

It is clear from the above mentioned ideas that the importance of effective decision making can never be overemphasized and it is essential to develop an integrated global DSS. Even today we can aim for a “renaissance man”, especially with the help of expert systems constructed to move in the direction opposite of specialization, towards reintegration of knowledge and overcoming specialization (Marek, 2002).  As it was very useful and great support to us from its evolution till today we assume that it will go through renaissance and will help to reduce the human effort. It has travelled miles in the past and it would have to travel miles in the future that is how new technologies emerges. Human make wonders with the help of decision support systems and it would be an added advantage for us to make our life easy.