Success and failure aspect of bridges

While crossing a bridge, we do not think of the engineering and technical design that goes behind a successful bridge. Bridges provide an important means of transportation, and there are a number of factors that play a key role in making a bridge successful or to collapse. A bridge collapse can result in unavoidable traffic problems and therefore it is vital to identify the design factors that contribute towards a successful bridge design. Some of the most notable engineering projects carried out in the history of the world involved construction of steel and timber bridges. Although the basics of bridge engineering and bridge design have remained the same for many years, each bridge construction project presents new and sometimes more challenging that must be identified by the engineers to ensure safety and protection of people crossing the bridge. The geology surrounding the area, type of materials to be used, weather and the amount of traffic expected to cross the bridge on a daily or monthly basis are perhaps the most important factors that must be taken into account. Even a slight miscalculation of these design factors can result in a disaster (Chatterjee, 1991).

What causes a bridge to collapse?

In this section of the paper, we will be briefly looking at the factors that result in a bridge to collapse. It should be noted that many bridge failures are caused by multiple factors. Poor design combined with natural disasters often leads to a bridge failure. By removing one of these factors, it is possible to maintain the bridge.

Design & Natural factors which can cause bridge failures:

Following are some of the factors that contribute towards a bridge collapse:

The advancement in the technology has provided an opportunity for today’s engineers to estimate the possibilities of the above failure factors, and to take these into consideration while designing the bridge (Demetrios. 1994).

The strength of the bridge lies in the ‘sections’ side of the bridge. Furthermore, long bridges are provided with the support of grounded pillars near the centre of gravity of the bridge’s weight. The bridge must be able to hold its own weight as well as of the total expected weight of the users. This estimation leads to the calculation of the proposed dimensions/density.

The design of the bridge should incorporate all forces and loads that the bridge is likely to experience in its life and therefore there is a need to take into account not only the load of the crossing traffic and the structure but also natural disasters such as earthquakes and floods as mentioned earlier. The loads usually act as a combination of two or more load factors, applied on the surface of the structure simultaneously.

Design load can be defined as the total weight of all the non-structural and structural components of a bridge and deck. This load usually takes into consideration the railing, lines, the roadway, sidewalks and other structures attached to the bridge. Wearing surface is also considered as one of the components of a bridge when determining the design load. Design load is usually uniform along the length of the component. Dead load is also required to be incorporated in the design load and is normally estimated by the designer.

Vehicle load is defined as the expected load of the vehicles crossing over the bridge. This type of load is variable, which results into varying shears, moments and reactions in the structural elements of the bridge. Vehicle load or forces are usually determined by taking into account the spacing and weights between the loads. It is the duty of the designer to estimate vehicle live loads to calculate the maximum effect of stress.

The roadway surface is usually placed on the bridge deck and it is the only part of the bridge that is directly in contact with the vehicles crossing over the bridge. A wearing surface is one of the most important design factors for a wooden or timber bridge, mainly because of the fact it enhances the overall skid resistance and ensures a safe and smooth surface for traffic passing over a bridge. Without a well designed wearing surface, a wooden or timber deck can deteriorate very quickly, resulting in inadequate structural capacity.

The design of a wearing surface depends on a number of factors including the volume and amount of traffic, maintenance and construction costs as well as the weight of the traffic expected on the bridge.

The dynamic effect includes the increased stresses applied on the bridge due to moving vehicles. It should be noted that the stress produced by same loads applied statistically will be significantly lower. Longitudinal force, Centrifugal Force, Wind Load, Thermal Force, Uplift, Earth Pressure and Earthquakes forces are other loads that should be considered when designing a wooden or timber bridge (Bamhart, 1986). 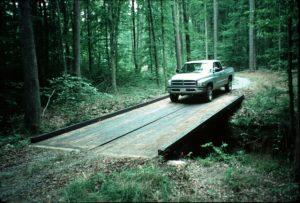 The total expected load in any bridge can be estimated using various methods. This load can then be analysed to calculate the total stress on the bridge. The critical stress point/failure stress can then be compared with these values to assure that the bridge does not fail and it is safe. The centre of gravity is the point where the stress is at maximum. The stress structure is analysed to obtain the support requirements for successful bridge operations. Exceeded tensile strength causes the bridge failure. The maximum load on the bridge can be calculated/attained through multiplying the cross sectional area with the tensile strength. The reliance on the bending strength to support the load (s) is not considered in the design of the bridge.  Assuming that the joints are not supported with bending loads; then it can be concluded that the forces acting on the bridge are compression and/or tension only, and these forces act in the directions of the associated beams.

American Society of Civil Engineers, (1980). Loads and forces on bridges.

Success and failure aspect of bridges