Apart from the difference in the wavelength of operation, the receiver and transmitter of an FSO link in the air is very similar to the underwater link. It should be noted that there are several factors that affect the properties of the ocean water. Location, characteristics of the content present in water, location, temperature and other temporal variations such as turbulence play a key role in determining the properties of the ocean water. It is absolutely vital to firstly identify and then understand these properties in order to build an optical link. Scattering and absorption are the main causes for the loss of optical energy when navigate the link. The multipath dispersion phenomenon caused by scattering can also have huge impacts on the optical link.

As highlighted before, the physical properties of oceanic water depend heavily on several factors including the geographical location and the depth of water at the point of consideration. The amount of light received by water in a vertical trajectory, at any point on the sea, is further used to categorise the water.  Depending on the extent of photosynthetic life evident, the topmost layer of water is usually known as the euphotic zone. The dysphotic zone is next zone below the euphotic zone and is usually found as deep as one kilometre down and therefore it is safe to say that the sun light in insufficient to support the photosynthesis process. The aphotic zone starts from the lower boundary of the euphotic zone and extends all the way down to the surface of the ocean. The fact that the sunlight does not reach this zone at all, several oceanic species take advantage of food sources that flourish under these conditions (Garrison, 1996).

N.G Jerlove conducted a thorough research on the subject and published a comprehensive text book in 1976. Jerlove proposed that it was essential to classify the clarity of water to achieve better results. As the system in very convenient in terms of application, it is still widely used and applied across the globe. Jerlove divided various types of water in to two main categories and named them as the littoral zone (coastal waters) and the oceanic water (deep blue sea water).

The littoral zone is further divided into nine categories whereas the oceanic zone is further divided into three groups. Water in the middle of the ocean is usually very clear. These deep blue waters in the middle of the ocean tend to be cobalt blue in colour. Studies have revealed that around 10 percent of the suns light received by these waters reach at least 90 m below the sea surface. The light does not reach deeper than 15 meters in waters where large amounts of chlorophyll are present and in the Baltic sea. From our discussion, it will be fair to conclude that the reduction of light plays a critical role in construction of a link budget (Apel, 1987). 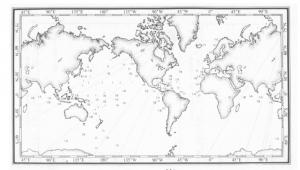 From the Figure 1 above, the locations of different Jerlov types can be seen evidently. From the map above, it is possible to determine how an underwater platform might respond to different areas in the sea. Although this map changes continuously, it acts as an excellent tool to estimate for the purpose. In the next section, we will look into the scattering and absorption properties of water.

Attenuation underwater can be defined as the phenomenon where organic and inorganic particulate impurities, scattering from the water, dissolved impurities and organic water cause intrinsic absorption which results in the loss of beam intensity. It should be noted that the amount of attenuation underwater shares a relationship with the Jerlov water type (Arst, 2003).

Seawater has a tendency to be absorbed primarily towards the red spectrum mainly because it contains Hydrogen Oxide molecules. With salts such as CaCl2, Na2SO4, NaCL, KCL and MgCl2 also present in the water, there is a considerably chance of light absorption taking place at specified wavelengths. Apart from the 400 to 500 nm window, as shown in Figure B, pure water is almost always absorptive (Shifrin, 1983). The amount of absorption occurring per meter of sea water is defined as the absorption coefficient of pure seawater. However, several other mechanisms such as the scattering from particulate and humic acids also play their part in the attenuation.

Figure 2: The absorption coefficient (m(-1)) is shown as a function of wavelength (nm) for pure seawater

Changes in the chemical concentration and compositions of the substances result in the variations in the spectral absorption of water. Depending on the properties of the water, these material substances are present in seawater in the form of suspended particulates (Shifrin, 1983).

Studies have revealed that Phytoplankton is the most significant factors influencing the amount of light received and reached to deep sea waters. The word Phytoplankton is derived from two words: planktos(wandering) and phyto (plant). Phytoplankton is found in deep waters (the euphotic zone) where only 1 percent of sun light manages to reach. As discussed before the typical depth of this zone is 100 meters but the exact figure is usually determined by taking several factors into account including the time of the day, location and weather. The presence of chlorophyll-a makes Phytoplakton grow in red and blue region and the mechanism eventually result in abundance of food production. The absorption of red and blue light increases with an increase in the concentration of this compound and causes the sea water to attain a light greenish colour (Kameda & Matsumura, 1988.

Figure 3: Cubic spline curve fitting of the absorption coefficient as a function of chlorophyll concentrations in the different Jerlov water types.

The distribution of phytoplankton in the euphotic zone is complex. Their distribution through the water column is not vertical despite the fact that several models are based around this assumption. The following given below can be used to determine the depth profile for chlorophyll.

Zmax is the depth of the chlorophyll maximum (m)

Σ is the standard deviation of Gaussian distribution

The distribution changes dramatically with changes in the temperature and the concentration of nutrients as evident from Figure 4 below. 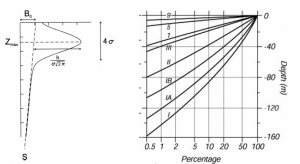 It should be noted that the magnitude of the peak concentration amplifies closer to the shores where the position of the peak zmax moves closer to the top of the water column. The satellite remote data, as shown in the figure below can be used to calculate approximately the amount of chlorophyll in different types of water (Breves, 2000). 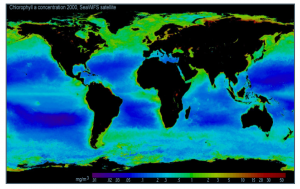 Figure 5: Satellite remote sensor reading of the cholorphyll – a concentration over the face of the earth [mg/m3]16

CDOM has the tendency of being converted into fulvic and humic acids and absorbed in the fluoresce and blue region at 420 to 450 nm mainly because it is made up of decaying organic marine matter. CDOM is also called the gelbstoff which means Yellow in German language. It has been observed that CDOM is present in very large quantities in the coastal waters whereas in the oceanic and deep blue concentration its concentration is on the lower side (Hansell, 2002).

Figure 6: Absorption coefficient of gelbstoff, adapted from the one parameter model of gelbstoff as a function of chlorophyll

The phenomenon where photons are redirected into new paths, thereby preventing the straight line on axis motion of photons is known as scattering under water. Scattering casts a shadow and therefore a beam will spread in loose light intensity or in diameter. 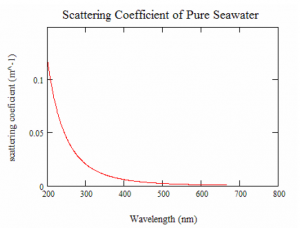 Figure 7: Scattering coefficient of pure seawater (m-1) as a function of wavelength (nm)

The equation given below is used to estimate the molecular scattering phase function when a photo experiences a change in direction due to a scattering event.

Where φ is the deviation in degrees from the original path 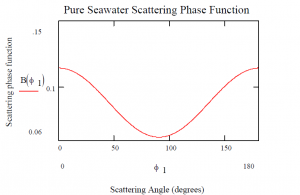 Figure 8: The angular distribution of the scattering phase function for pure water.

Scattering may be present in the lower wavelengths in the ocean but it is absorption process that usually dominates the sea environment (Mclean et.al, 1998). Scattering can, however, play a significant role closer to the land where organic matter and particulate is brought into play by river runoff.

Figure 9: For pure seawater, the absorption coefficient is overlapped onto the scattering coefficient plot showing the dominate nature of absorption.

The model used to represent the particulate scattering in this report is called the Kopelevich model and is given by the equation given below:

The possibility of forward scattering in the ocean water is considerably higher than the backscattering.

The effects of temperature, salinity, variations from flow, variations of the refractive index, scintillation from turbulent water and the effects of stratified layers of waters are neglected for the purpose of this investigation. However, these factors can still have considerable second order effects but not as much as the primary factors which include scattering and absorption. Studies have confirmed that the water is incompressible. However, at certain pressure and depth, the refractive index does increase. The dependence of refractive index on environmental parameters have been measured by many researchers (Sanchez & McCormick, 2002).

The change in refractive index value in relation to the depth and pressure is negligible, with an increase of about 1.37 x 10 ^ 4 being recorded at 100 meters deep from the sea surface. Similarly, the temperature also shares a relationship with the refractive index with a decrease to 1.3318 measured at 30 degree centigrade. The effect of salinity is much greater with an increase of about 1.92 x 10 ^ - 4 estimated with one part per thousand increase in salinity. Although these effects can increase the challenge of tracking and pointing between under water platform, they are considered as secondary problems with main issues being the absorption, scattering and attenuation.

the onset of the southwest monsoon”, Earth Planet Science, 109, No. 4

Morel, A., (1984). Optical properties of pure water and pure sea water, in Optical Aspects of

Yentsch, C.S., (1960). The Influence of Phytoplankton Pigments on the Color of Sea Water,