The UK and its Trading Partners

According to International Civil Aviation Organisation, a rectangular area used for the landing and takeoff of aircraft is known as the runway.

Airport runway is an amazing piece of construction. A typical runway is 2 miles long, as wide as 16 lane highways and 3 feet thick. Runways are an integral part of the airports all across the world. Considering a fully loaded 350,000 kilograms 777 hitting hard, it is to understand why the runways have to be strong and reliable to take that strain without cracking and collapsing.

The bigger the plane is, the bigger the runway size should be to handle the extra stress. Civil engineers have to be extra careful while designing this massive infrastructure. Several important parameters like number of tyres on the place, distance between the tyres and their size have to be considered.

It takes months and sometimes years to complete a runway that meets international standards. Typically, runways are a man made surface consisting of asphalt, concrete, and natural surface such as salt, gravel, ice, dirt and grass. According to the data revealed by the Denver International Airport in the United States, nearly 2.5 million cubic yards of concrete was used to construct five 12,000 foot runways and taxi-ways.

Prior to adding a 17 inches concrete paving, the engineers put down compacted soil, a foot deep layer of soil with 8 inch thick cement base on top. Main runways are designed in the direction of wind so they could assist the aircraft in landing and take-off. It is the duty of the air traffic controller to determine which runway will be used for landing and which for take take-off after taking into account the wind speed, weather conditions and air traffic conditions.

Engineers sometimes design runways crossing each other to ensure the air traffic controllers are paying more attention.  Taxi runways are used by the pilots to take the plane from main gate to the runway for take-off and from runway to main gate as it lands.

Choice of materials for runways

The choice of materials used for constructing runways in made by the engineers after assessing the local ground condition. Often, for a busy airport where ground conditions are normal, concrete is the first choice of pavement as it can be easily maintained as compared to other construction materials.

Occasionally, runways have expansion joints which allow relative moment of the concrete slabs placed inside the concrete pavement to accommodate peak demand periods.  Runways with unstable ground conditions are usually made of asphaltic concrete surface as it is easier to scrap on a periodic basis. For airports with light traffic and light aircrafts, use of a sod surface is recommended. Some runways have been reported to use salt flat runways as well to cut down the cost.

Designing pavements is a complex process as it takes into account the subgrade condition. Engineers come up with the specifications after analysing the bearing capacity of the subgrade. A pavement thickness between 10 inches and 4 ft (including subgrade) is recommended for commercial aircrafts, regardless of what the top surface is.

There are two approved methods for designing Airport pavements:

It is assumed that the pavement is an elastic plate with a uniform reaction coefficient (K value). However, research has shown that the formula that K values is not applicable with aircrafts using the latest technology.

California bearing ratio was developed in the late 1940’s from a calculation of the value of a function outside the range of known values. This method is applicable on modern aircrafts.

Some designs have been developed by combining the above two methods to achieve better results. Based on the vehicle response as an important design parameter, an analytical system has been designed recently. This new method has proved to be a great success as it considers air traffic conditions, materials used in the construction and response of vehicles.

Manufacturers usually tend to minimise the stress on the pavement as it is very expensive to construct. Latest aircrafts come with numerous tyres in an effort to support the weight of the place. Effects on the pavement can also be minimised by paying close attention to the characteristics of the landing gear.

Pavement surface is designed carefully after considering the fact it has to provide maximum friction for wheel braking. Furthermore, to minimise the effects of aqua planning that prevents the vehicle from responding to control inputs, the surface is grooved so the rain water can flow into them and the peaks of the grooves remain in contact with the aircraft tyres.

To maintain required FAA friction levels, maintenance staff is responsible for removing airfield rubber or hydro-cleaning. In areas where the soil is at or below the freezing point, the construction of runways is extremely difficult as compared to the temperate regions. Since differences in natural surface can give rise to variable thermal regime and slope stability, engineers have to give a solution to avoid serious and progressive consequences.

The state of subgrade soil plays a key role in determining the final design. The design of a pavement sections also depends heavily on the type of subgrade soils. Design problems rarely occur in frost conditions as they do no tend to change their stability or load/pressure handling abilities with seasons.

Model Maker and Road Maker software are two of the most widely used softwares for designing runways. Machinery, including the Topcon ATG 6 automatic levels and Topcon GTS series are typically used to assess the bearing capacity of the runways. GPS Machine Control System helps in completing the layer works. FC 200 Controller along with Topsurv, pocket 3D and 3DMC softwares also among the tools required to successfully design a runway.

Consultants are usually responsible for delivering the finale design. Before the design is released, freeman extracts information off the drawings and uploads it onto the Model Maker and Road Maker softwares.

Contractors are not supposed to bring in their own controls as they are required to have over the control to the consultants.

If the job involves renewing an old runway, analysis should be done to determine if the old runway has deteriorated to a point where it has to be rebuild from the scratch. In some cases where underlying foundation layers have, the old runway is stripped off and digs in down to the stable layer.

The process of dynamic compaction is very interesting as it involves dropping a significant weight with use of a crane. The impact of the weight creates tremendous stress on the surface to compress the weaker patches which have the potential to collapse.

The construction of roads can be defined as of preparing a hard surface for the travellers by overcoming any obstacles in the right of way, in consideration with state of law. The process of road construction starts with the design of road patterns best suited for residents with respect to their travel needs. The first step taken during the construction phase is removal of earth rocks by digging, before laying on the pavement and road building equipments materials.

Once the design and environmental and legal issued are approved/considered, the road alignments are finalized by the civil works team management; the design gradients and radii of the road are set to as per best fit methods with respect to the site ground levels. This activity ensures minimize cut and fill for civil works and enhances diver’s safety.

Roads are primary constructed for the use of motor vehicles and pedestrians. Therefore, rain storm drain systems along with other environmental impacts are considered as a major parameters in the road designs. Sediment, erosion and other control systems are built to neutralize detrimental-effects. Drain lines are constructed all the way along the road to assure storm water is collected safety at the nearest sewerage system. The Darin lines are built in road-easements with the joined seals to ensure smooth flow of water. This system needs approval by the local development authorities, to guarantee that the design flow is good enough for the actual drainage system.

The following processes are taken during the construction of roads;

Roads are constructed of various layers of asphalt and aggregates. Excavation is carried out to remove low compact and unrequited material from the land / site, and the moisture content is balanced as per designed value. This is then compacted with standardized fill with relative compact percentage of 85-95. This process is completed by the compacted layer method, in which the fill layer is spread along the designated area and its is then compacted through heavy weight machinery. The fill – compaction process is undertaken until the desired specifications of the road are achieved. Following is an example of road material specification details, provided by the road construction agency in UK. The thickness of layers may vary depending on the specifications of the heavy traffic and native soil 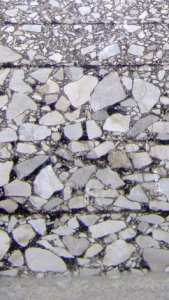 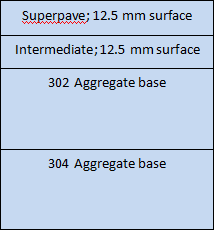 Figure 1; Details of Material specifications with respect to layers

The fill material used for the road construction is without any organic material and has the desired/designed stress bearing ratio and minimum plasticity index. The aggregate base mixtures is generally comprised of a mixture of sand and very fine gravel, which helps to maintain the bottom surface free from any organic matter growth such as plants and serve as lower stratum drainage.

The next layer fill is composed of broken rocks, gravel and /or sand clay of certain sizes as shown in the figure 1 above. The road-bed is rolled for each layer of fill, which compacts the fill and normalization the particulate distribution throughout the road.

Various pavement layers are used to improve quality of the road. These pavement layers consist of geosynthetics which are of extreme importance with respect to improving quality of the roads. These geosynthetics help to increase the road/layer strengths, enhances reinforcement attributes, drainage and filtration. Therefore, pavement performance is optimized with respect to overall construction, decrease in costs and maintenance

The road final finishing is done by paving. The road surface is finalized after having considered factors such as expected usage and other economic factors.

This section provides technical details of a standard pavement design criteria for road constructions.  The design criteria can be set for twenty years of pavement life provided that the maintenance work is carried out to maintain the road surface after completion of the road. Equivalent Daily Load application and Design Traffic numbers are considered in the design calculation for the roads.  The following classifications can be considered as minimum limits for pavement sections during the design of the roads. Final designs should be based on real site test results for sub grade support

Moisture conditioned fill is put in to replace the expansive soil sub-grades. Expansive Soil sub excavation requirements are as follows;

Chapter 3; Comparison of Runways and Roads

Both Runways and highway/local roads are engineered to support various transport systems. Road are constructed to provide transport link via ground/land where as runways support the areal routes. Typical runways are designed to bear much stress through heavier equipment use, and are therefore designed with intense care and state of the art technology. The following table illustrates the comparison between the roads and runways design with respect to design and construction.`

Table 3; Comparison of Roads and Runways

The Roadway Design & Construction Manual, adopted by the Board of County Commissioners of Jefferson County, Colorado, 2009, available online at; http://jeffco.us/jeffco/planning_uploads/regulations/roadway.pdf, retrieved on 12/12/12